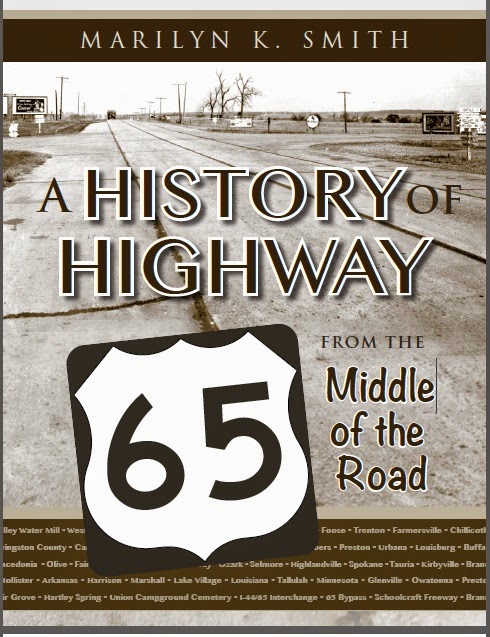 When I was growing up in Marshall, Missouri, U.S. Route 65 ran through the middle of town, sharing the main street, Odell Avenue. My friends and I stood at the corner of Odell and Yerby, our swimsuits wrapped inside towels, waving at passing motorists for a ride to the city swimming pool.

I traveled the highway thirty miles south to the state fairgrounds in Sedalia after I learned to drive; the highway was hilly and curvy and in many places the safest speed was less than forty miles per hour. The highway also took me thirty-five miles north to
Carrollton and my first full time radio job as an announcer.

“The first section of highway 65 was completed in 1930 in Missouri between Fair Grove and Springfield over what was Route 3," she told me. "That’s not quite in the middle between New Orleans and Canada, but close enough that it made sense for my book.” As well, she says, much of her book is on the highway’s Missouri history between Sedalia and Branson, and Fair Grove is about in the middle.

Marilyn grew up on a farm adjacent to the old Buffalo-to-Springfield road, which became Route 3 and then Route 65. Springfield business developer John T. Woodruff was influential in getting Route 65 through Springfield, as he was with the east-west Route 66, creating what he called “the crossroads of America.”

Marilyn recounts several ghost stories in her book. “Fred O’Dell, a teacher at Elm Spring School, was driving home one night in his horse and wagon and drove past Elm Spring Cemetery. He saw something white in the cemetery rise up and back down, then rise and up and back down. It scared him so that he unhitched the wagon, got onto the horse and rode it very fast home. When he got home, he thought, ‘Now that was silly.’ He went back the next day and discovered what he saw was a piece of paper that had been picked up by the wind.”

She says others have sworn seeing a headless horseman in the woods behind where she and her husband live today, on thirty acres across the road from where Elm Spring School was located.

A personal journey
Over the course of thirty years researching and writing her book, Marilyn interviewed dozens of elderly persons who have since passed away. “Hearing stories of them and their parents or grandparents traveling on the road when it was dirt or gravel, when it was Route 3 with potholes, curves, and hills that took forever to get somewhere, was the most fun I had in writing the book.” Floods often made the highway impassable in some locations, especially in the Lower Mississippi Valley where flood waters could be thirty feet deep.

In searching photos for the book she discovered a personal connection with one. “I’m secretary of the historical society at Fair Grove. We were donated a photo of a WWI Home Guard Unit bivouacked at Fair Grove posing in front of Springfield City Hall. Persons named in the photo included my grandfather Casper Thomas and two great-uncles, Ottie Hainline and George Graham.”

Marilyn wrote of the Home Guards: "Groups such as the Fair Grove one were guarding the home front in case of fire, flood, tornado or other disaster. . . . The Home Guard’s purpose was to fulfill the duties formally taken care of by the National Guard, while they were away fighting World War I."

A portion of highway 65 from Fair Grove north is named Thomas Road because construction took the farms owned by Marilyn’s grandparents, Casper and Belva Thomas, and her great-grandparents, Joseph and Addie Thomas.


Marilyn K. Smith is author of The Window Pane Inn and Other Short Stories and has been published extensively in newspapers and magazines, including The Ozarks Mountaineer, Springfield! Magazine, and 30 years as a weekly columnist for the Buffalo Reflex. She is contributing editor of Journal of the Ozarks. Her books may be purchased at Somewhere in Time gift shop in Fair Grove or directly from her at msmith_writer1@att.net.

Click image to order my book from Amazon in paperback or Kindle.