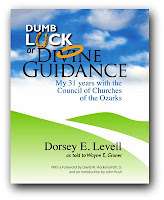 Dumb Luck or Divine Guidance is an example of combining a memoir with a corporate history. Dorsey Levell and I were hired by the Council of Churches of the Ozarks, Springfield, Missouri to write the book for its fortieth anniversary celebration observed in October 2009.

In a folksy, easy-to-read style and a deeply personal account, Dorsey recalls his thirty-one years as founding executive director of the Council. Special features of the book include personal remembrances by community leaders who worked with Dorsey, a timeline of key events in the history of the Council, a list of operating agencies and ministry partners of the Council, an honor roll of Council board members, and an index. There is a section of photographs of some of the programs Dorsey started, including bicycle repairs and new bikes for children’s Christmas presents, Ozarks Food Harvest, a new headquarters building, and Gift of Time to recognize and thank community volunteers.

Dorsey takes readers through his successes and his failures. From his early and tentative days with the Council when he was ready to quit because there was no office, no staff and no budget, to an annual budget of twelve million dollars. From the heady days of seemingly unstoppable growth of the Council, to a fear he would cause its downfall in his despair over the unexpected death from cancer of his closest friend and co-worker.

Dorsey speaks candidly of the reasons for his divorce after forty-two years of marriage, being diagnosed with degenerative arthritis, battling prostate cancer, undergoing five-way heart bypass surgery, his nearly three decades as a chaplain in the U.S. Army Reserve, and his love for the outdoors, especially fishing.

During his tenure the Council created fifteen human service agencies, grew to 120 paid staff and more than one thousand volunteers, and was recognized throughout the United States as a model of effective outreach ministries.

Cover designed by Eric Baker. Visit him at Blue Sky Design.
Posted by Wayne Groner at 7:28 AM